Here I am on my lunch break sitting in a somber mood. There is no apparent reasoning behind it, I just sort of woke up with a cloud hanging over my head. The things that had been stressing me as of late have been resolved and although the decision was not what I wanted it was the exact conclusion God intended for me to come to. In that I truly have peace. 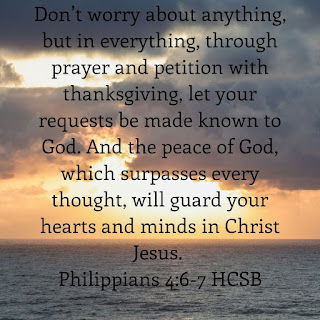 When I made the decision not to move I felt every bit of stress leave my body. My mind was quickly put at ease and the day seemed much brighter. I've come to realize this mornings mood is a byproduct of yesterdays decision.

Peace is NOT synonymous with acceptance. I'll say it again. Peace is NOT synonymous with acceptance. I knew I had come to the right decision because of the peace that washed over me and the lift in my mood. However, I did not accept the decision. I still want to move, i still want to force a change even though i know that it is not God's timing. I'm getting in my own way.

This move to another city was to be MY fresh start. No matter how many times I tried to convince myself it was best for all of us, deep down I knew it to be false. I had selfishly come to think my plans were the only plans blessed by God. Arrogantly I declared exactly what I knew God to be telling me to do. I could not have been more wrong... on the timing at least. I planned that in a years time u would relocate to Louisville and start over. New job, new schools for the kids; the works. Although I chose next year I mulled over this summer, next February, or next summer never really settling on  a specific timeframe. In fact, even after making the decision not to move, in the back of my mind I still had maybe I can plans. I had yet to accept the continued assignment on my life in Lexington.

You can't blame everything on the devil. I want to. I want to say the devil gave me a one tracked mind and my tunnel vision was something he used to keep me from seeing God's will. This- however, was all me. I'm the one who mentally checked out on my life here, for a life I had no true vision of. So when the decision was finally made and the will of God finally understood I found myself in this mornings somber mood. I had accepted his place but I had not accepted His decision.